The following history is pulled from several sources, but mainly from a great wee book called ‘The Mill on the Don’.  The story of the Donside Paper Company by John Fedo. You can still find it here http://www.amazon.co.uk/Mill-Don-Story-Donside-Company/dp/0907383394

I thoroughly recommend it.

Well if you didn’t already know, the book title gives it away, Donside Village sits on the space that was occupied by the Donside Paper Mill.

There are a few aerial pictures on the site https://www.britainfromabove.org.uk/ as follows:

The first papermill operated on the site from 1696. The story is quite a rollercoaster. The mill was at times a world renowned manufacturer of paper and at others came close to ending it’s operation. There were many twists and turns as the business changed its products and methods of production and invested in new machinery to stay ahead of the game.

Reading John Fedo’s book, I expected that I knew how it ended! The fact that I was living at Donside was a little bit of a clue. However I was surprised to discover that the last paragraph read.

“It continues a fine tradition for quality paper founded by Patrick Sandilands on the banks of the Don at the dawn of the eighteenth century. It is a pretty good bet that the Mill will see the tradition flourish well into the twenty-first”.

It was only then that I realised the book had been written in 1993 when the business still operated. Well, it did make it to the twenty-first century, but only just, closing in 2001 as the following link confirms.

It was obviously clear that whatever was to happen in this area it would not be a papermill, and the buildings were taken down, pictures taken during the demolition can be found here. 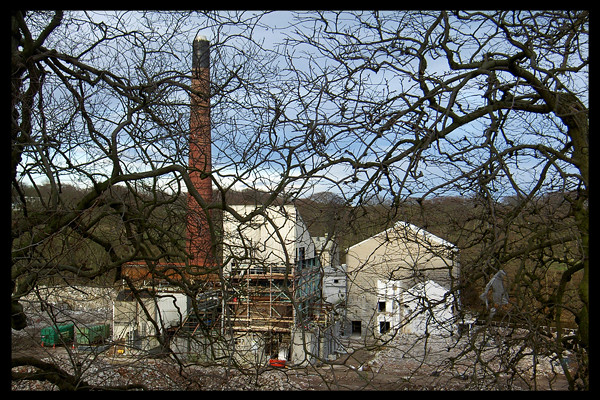 The demolition seems to have taken place around 2006 as this link shows regarding the demolition of the chimney http://news.bbc.co.uk/1/hi/scotland/north_east/4926016.stm

The first references to Donside Urban Village seem to have been around 2008.

With plans beginning to look the below image.

The following link is the proposal submitted to the Scottish Government for the Scottish Sustainable Communities Initiative http://www.scotland.gov.uk/Resource/Doc/212607/0083275.pdf This provides details of the intended development.

A planning report submitted in 2011 is here: https://committees.aberdeencity.gov.uk/documents/s12310/

As with most of these projects, it didn’t run entirely to plan and as the development reaches it’s conclusion, the final result will not be quite as planned. Tenants First who originally started the process, were taken over by Sanctuary Housing who considered that some of plans could not be delivered. One of the changes was that Tenants First/Sanctuary now have their offices on the site.

However, most of those who live at Donside think that the area is much as we hoped it would be. This is a lovely area to live in and there are lots of great people who live here.

Article on Aberdeen paper mills, with a little about Donside http://mcjazz.f2s.com/PaperMills.htm

Information on Calenders: a piece of papermaking machinery that gives it’s name to some Donside streets http://en.wikipedia.org/wiki/Calender

1995 aerial photograph of the mill

Some photos of the mill; one picture on the first page – click on “View all works” to see more. https://emuseum.aberdeencity.gov.uk/people/24302/